BCM325 has first introduced me to live tweeting as I have not interacted in anything like this before and didn’t know what quite to expect. In week 5, due to the high intensity and popularity of live tweeting, we got #BCM325 TRENDING. It was something I was not used to but by the end of week 5 I got used to it.

In week 1, we watched Metropolis, a 1927 German expressionist science-fiction drama film presenting a highly stylized futuristic city where a beautiful and cultured utopia exists above a bleak underworld populated by mistreated workers. From my first live-tweet experience, the tweet from the movie Metropolis was blindly written. During the live-tweeting, I was reacting and interacting with other students tweets and through my evaluation of these tweets, I realised how in-depth some tweets were and the research behind it, pre-planned tweeting was the way to go. Heading into the weeks ahead, I made sure to pre plan my tweets ahead of time.

In week 2, we watched A Space Odyssey, a 1968 epic science fiction film produced and directed by Stanley Kubrick. Before heading into the live-tweeting, I made sure to do some initial research and pre-plan my posts before hand. After reading reviews, overall, this film was rated 87% rotten tomatoes. Personally, I am not the biggest Anime or science fiction film fan but, I did enjoy it.

In week 3, we watched WestWorld, a 1973 American science-fiction Western thriller film written and directed by Michael Crichton. I enjoyed this film more than I anticipated. This was the turning point for me as I gained more confidence to re-tweet, comment on others post and developing tweets of my own.

In week 4, we watched Blade Runner, a 1982 science fiction film directed by Ridley Scott, and written by Hampton Fancher and David Peoples. This was by far my favourite film and the only science fiction based film I decently enjoyed. I have seen this before but re watching it a second time, for the purpose of the live-tweeting, I understood the whole concept a lot better. This was probably my best week and the week I gained the highest interactions. Here are some of my tweets and interactions from this weeks live-tweeting session: 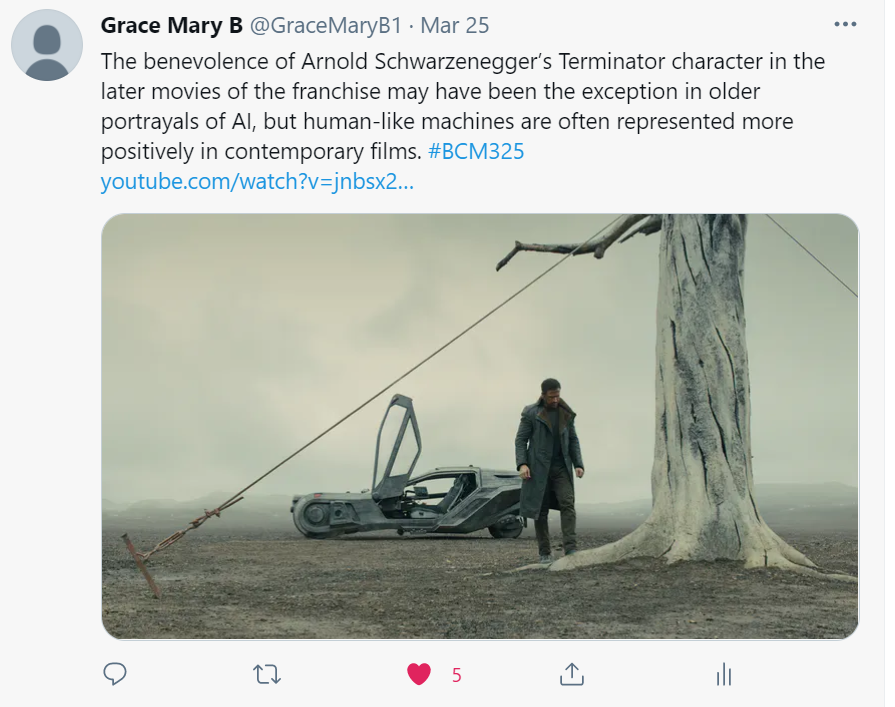 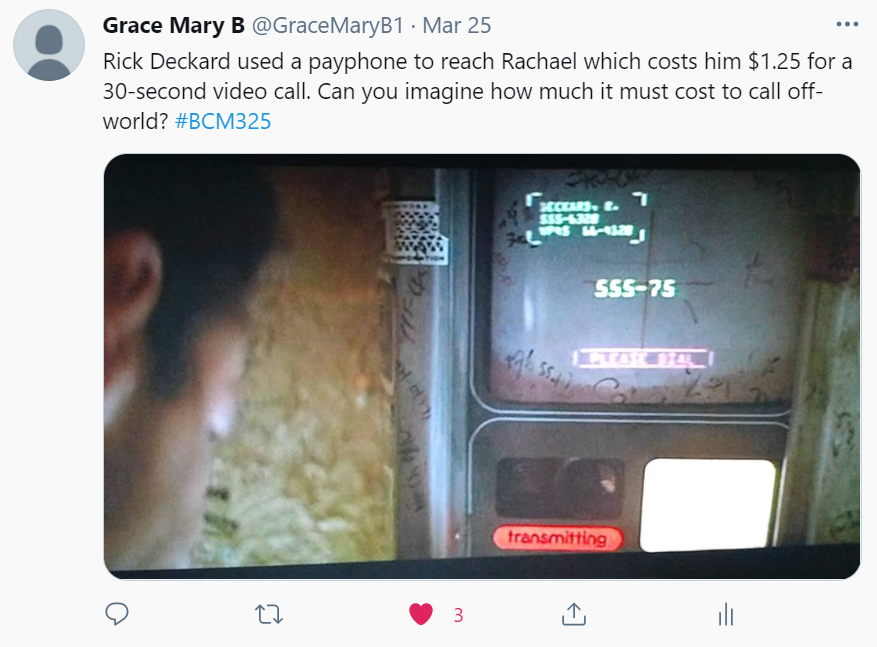 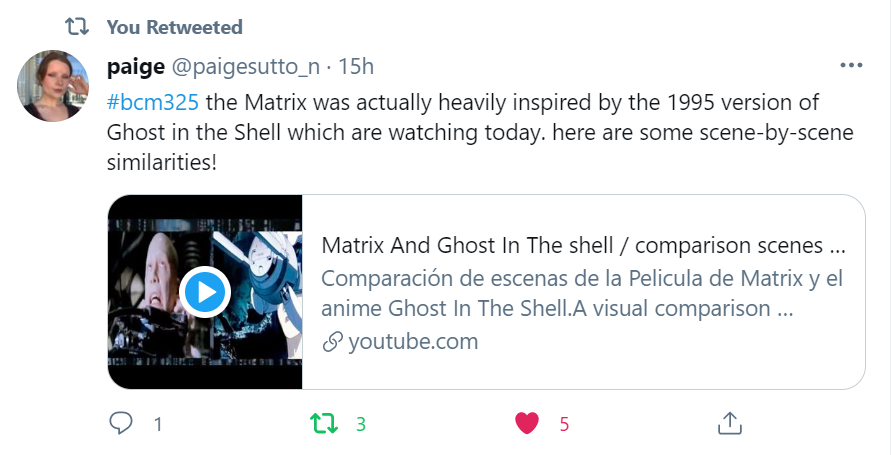 In week 5, we watched Ghost in the Shell,  2017 American science fiction action film directed by Rupert Sanders and written by Jamie Moss, William Wheeler and Ehren Kruger, based on the Japanese manga of the same name by Masamune Shirow. This was an interesting film I haven’t watched before, and the first Anime film of the semester. This week, I engaged more with others posts and focused less on my own, this is where I fell back a bit. Here are some interactions and a couple of my own original posts from this week:

Overall, I am getting used to the live-tweeting. Moving forward, I will develop longer tweets involving questions or polls to gain higher audience interactions. I will continue using research based tweets for most but will try to incorporate more GIFS and images.

Here are some other original tweets that didn’t gain as high of an interaction: 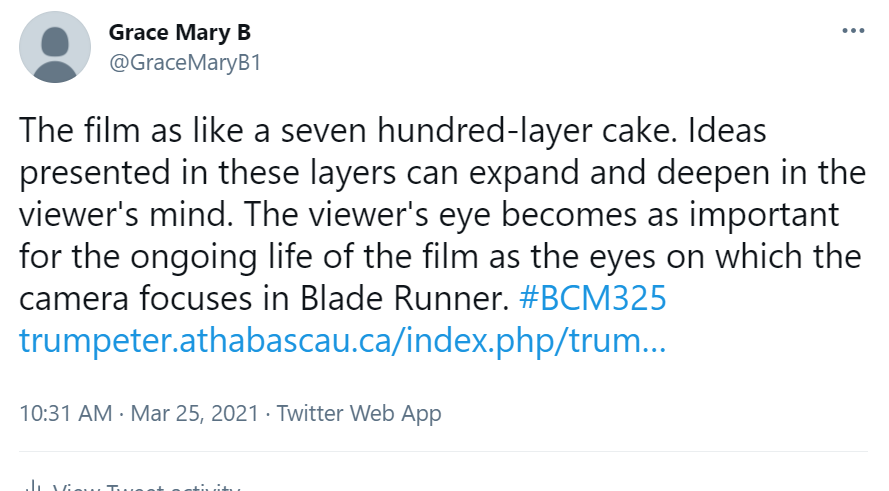 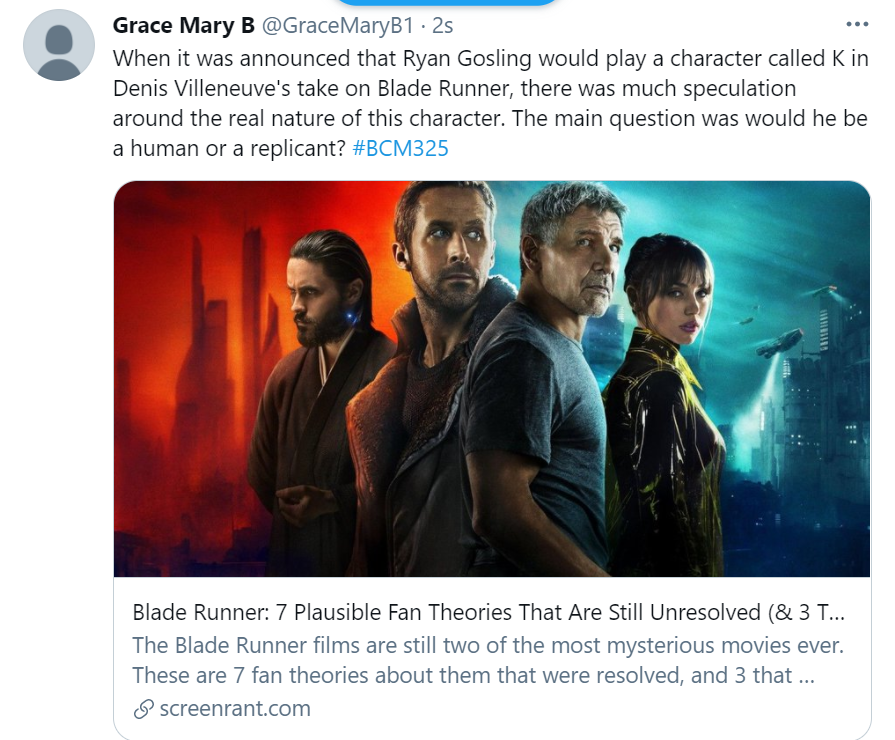 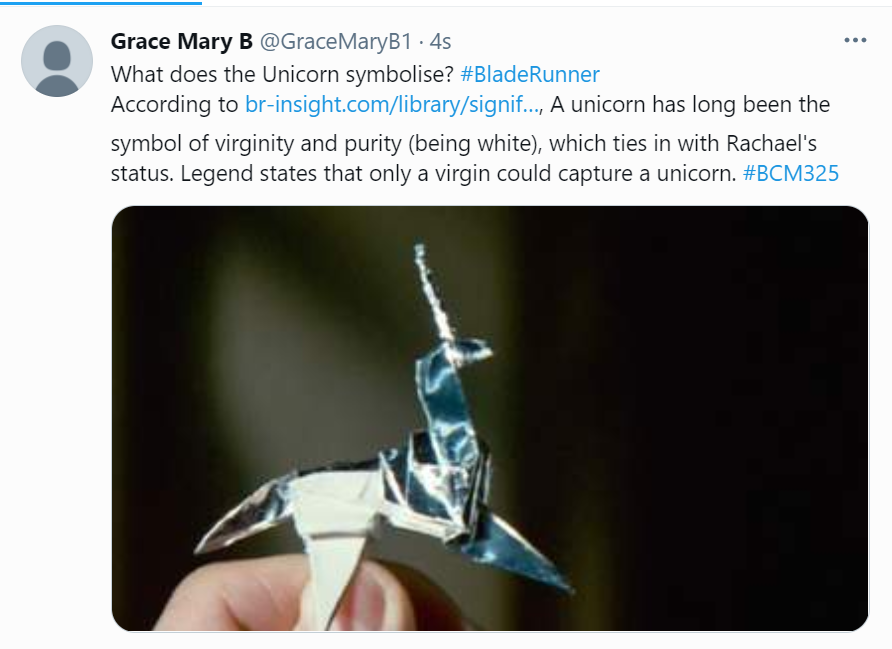